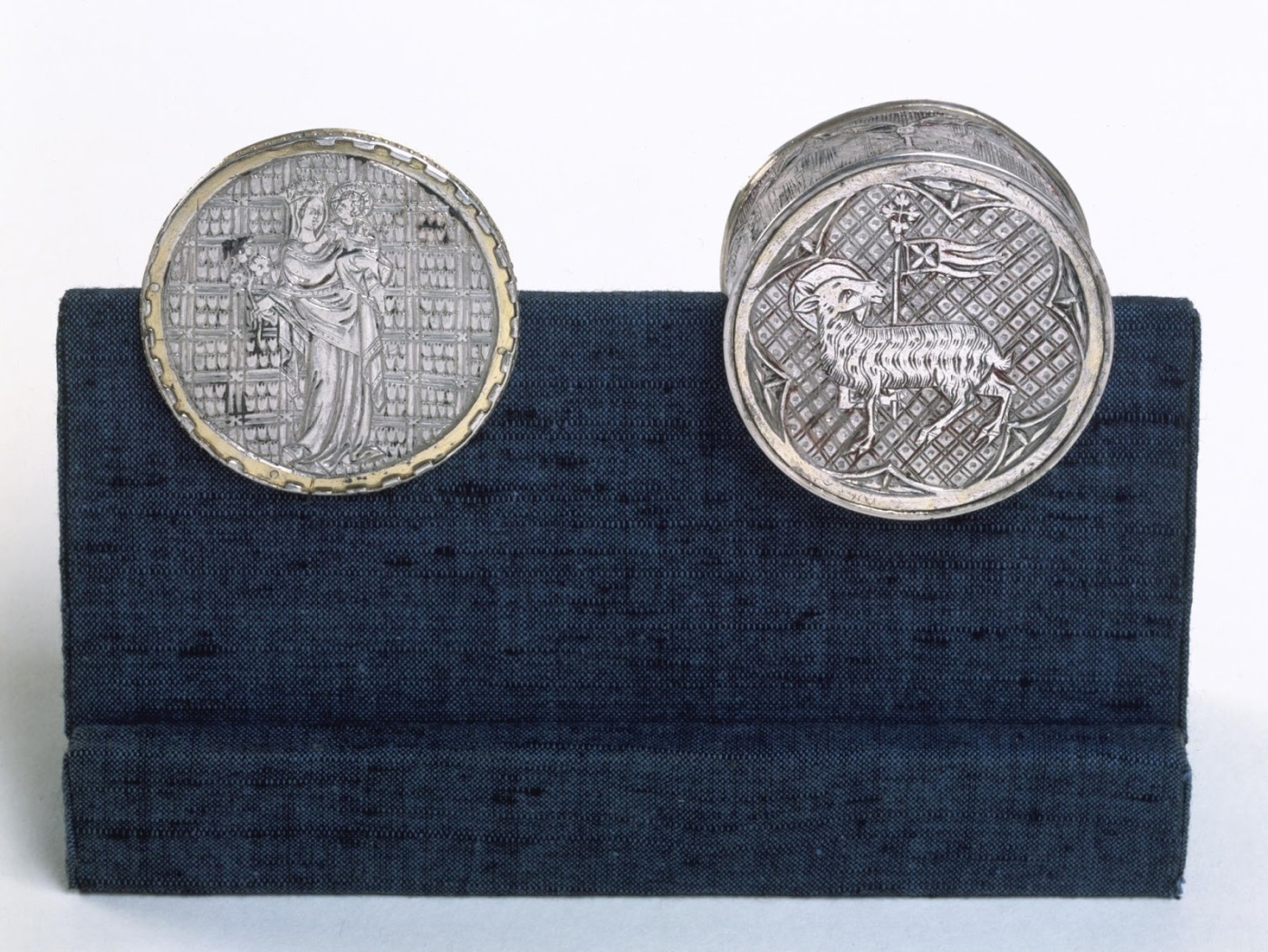 There are some objects that make me jump up and down with glee and this is most certainly one of them. This glorious parcel-gilt silver box, made in East Anglia sometime between 1310 and 1325, is the Swinburne pyx. It is one of only two surviving medieval pyxes from medieval England and it was used either to reserve the Blessed Sacrament hung above the high altar as at Dennington, or for transporting the Viaticum to the sick in extremis. It’s now in the V & A and the images here are © Victoria and Albert Museum, London. Please don’t reproduce them unless you have express permission.

The pyx was bought by the V & A in 1950, after it had been brought to the Museum by Mrs L. G. Swinburne. The pyx appears to have been in the possession of her husband’s family, the Swinburnes, for generations and Charles Oman has suggested that their ancestors the de Reymes, a Suffolk family, commissioned the pyx as part of their private chapel gear. The Swinburnes were Recusants and it seems that the pyx continued to be used and treasured after the Reformation, which is how it miraculously survived.
Let’s have a look at its extraordinary decoration.   The pyx is engraved inside and out with a series of images.   Originally it appears that the box was enamelled using a basse-taille technique and was brightly coloured.  Traces of a blue enamel can be found on the outside and in, but how the enamel came to be lost is not clear.   Though the circular faces of the pyx are intact, the side decoration has also been defaced at some point too.
The images on the four circular faces of the pyx all allude to the Passion or the Incarnation of Jesus, to the physicality of Jesus and are therefore suitable for the purpose of this box as a container to hold within it the Hostia, the Eucharistic victim, the Body of Christ.
The image on the bottom of the outside of the box is the Agnus Dei, the Lamb of God, the sacrificial Lamb, an allusion to Christ the sacrifice.  On the outside of the lid, the image is of the Virgin and Child, Christ Incarnate, God and Man, bodily, physically held by his Mother.

Inside the pyx, the lid is engraved with a scene of the Nativity, alluding to the Incarnation. Our Lady is ‘in gesyn’, as medieval people would have called it, in bed. Joseph is asleep on his arm and the Ox and Ass adore the physical presence of the Christ child in the manger. The bottom of the box is engraved with the Vernicle, Christ’s head full frontal; the image that, by tradition, was impressed on Veronica’s handkerchief as Christ paused on the Via Dolorosa in his way to the cross. As the priest laid the body of Christ into the pyx after the Mass, which in the Middle Ages don’t forget was celebrated as an unbloody version of Christ’s bloody sacrifice, he would have laid it upon this image of Christ going to his Passion. Of course the use of the Vernicle on an object that comes into direct contact with the Host, the Body of Christ, was not that unusual. As we seen elsewhere on the blog, it was common for the paten, on which the consecrated Host was placed at Mass to be engraved with a Vernicle too.