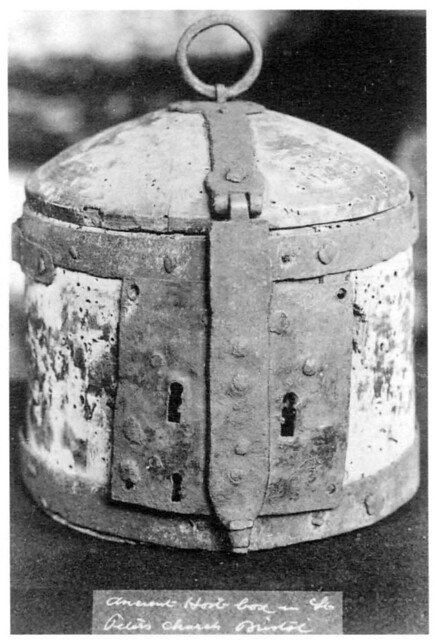 The medieval object in the photograph above no longer exists.  It belonged to the church of St Peter in Bristol, which was sadly blitzed in the Second World War and object perished.   As you can see it’s a circular box with a slightly domed lid, that is rather ill-fitting.  The box itself has been turned from a single piece of wood and the whole thing has been painted white.  You will notice that it securely clasped in iron at the bottom and the top and that the lid (possible hinged) was secured with a hasp and lock.  The lock seems to be have been opened only with three keys as there are three keyholes. On the top of the lid is a metal suspension loop, so the object was clearly designed to be hung up.

It had long been the parish tradition at St Peter’s that this curious box was used for the reservation of the Sacrament, that it was part of a hanging pyx. All the modern antiquaries that saw it doubted that tradition and assumed that it was a ‘host box’ or a box to contain a precious object.  P. G. Cobb, writing about the object in 1995 in the Transactions of the Bristol and Gloucestershire Archaeological Society, accepted the parish tradition and concluded that this object was a rare survival of a ‘medieval wooden pyx’ into which the consecrated Host was placed and suspended above the altar. Certainly the extraordinary lock on this object suggests that the item it contained, whether the Sacrament or another object, required stringent security measures and the suspension loop on the top of the box makes little sense unless the object is to be suspended.

I too believe that this object was part of the mechanism of a hanging pyx, but I have my doubts that this object is the a pyx itself.  It’s more likely, on balance, to be a wooden case into which a pyx made of precious metal was placed. There is evidence and Cobb cites this of the use of wooden pyxes in the late Middle Ages.  Henry VII’s will refers to use of them in poor parishes, a ‘foul’ practice he calls it and he offers each parish with one, a new pyx of silver.  St Peter’s Bristol was a large, relatively wealthy city church, it could have afforded a metal pyx, so I think it was hardly likely to have been using a wooden box alone to store the consecrated Host.   Henry VII is quite right that a wooden pyx is a ‘foul’ way of reserving the consecrated Host.  It was deeply impractical and unhygienic way of storing the Sacrament and I can only see a church using one if it really couldn’t afford a metal one.     If the Host was placed directly into a wooden box like this, one that is badly sealed and is then hung up in the damp environment of an unheated medieval church, within hours the Sacramental wafer would become limp, unpalatable and indeed ‘foul’.   The fact that the case is locked with three keys suggests that the pyx was not being opened every day for the Sacrament to be refreshed.

I think the size of the object also indicates that this object is intended to contain another vessel.  The box measured six inches in height and was six inches in diameter and half an inch thick.  This is a much bigger vessel than is needed to contain the consecrated Host.  It is ample space in which to contain a fairly sizeable metal pyx could be placed.   This container with its slightly domed lid, could accommodate a pyx of of around four and three quarter inches inches in diameter and slightly greater in height.   The vast majority of the medieval metal pyxes that survive could easily fit within it with room to spare. 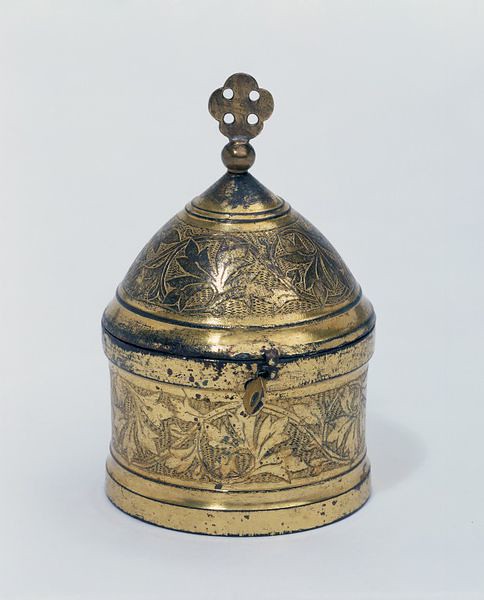 The English Godsfield pyx in the V & A, is 4 1/2 inches tall and 3 inches in diameter, so would have fitted in our Bristol case with plenty of room around it.  It could have been easily removed from the case and replaced when needed.

Further reading: The whole of P. G. Cobb’s article can be read here.

2 thoughts on “The Bristol pyx case”