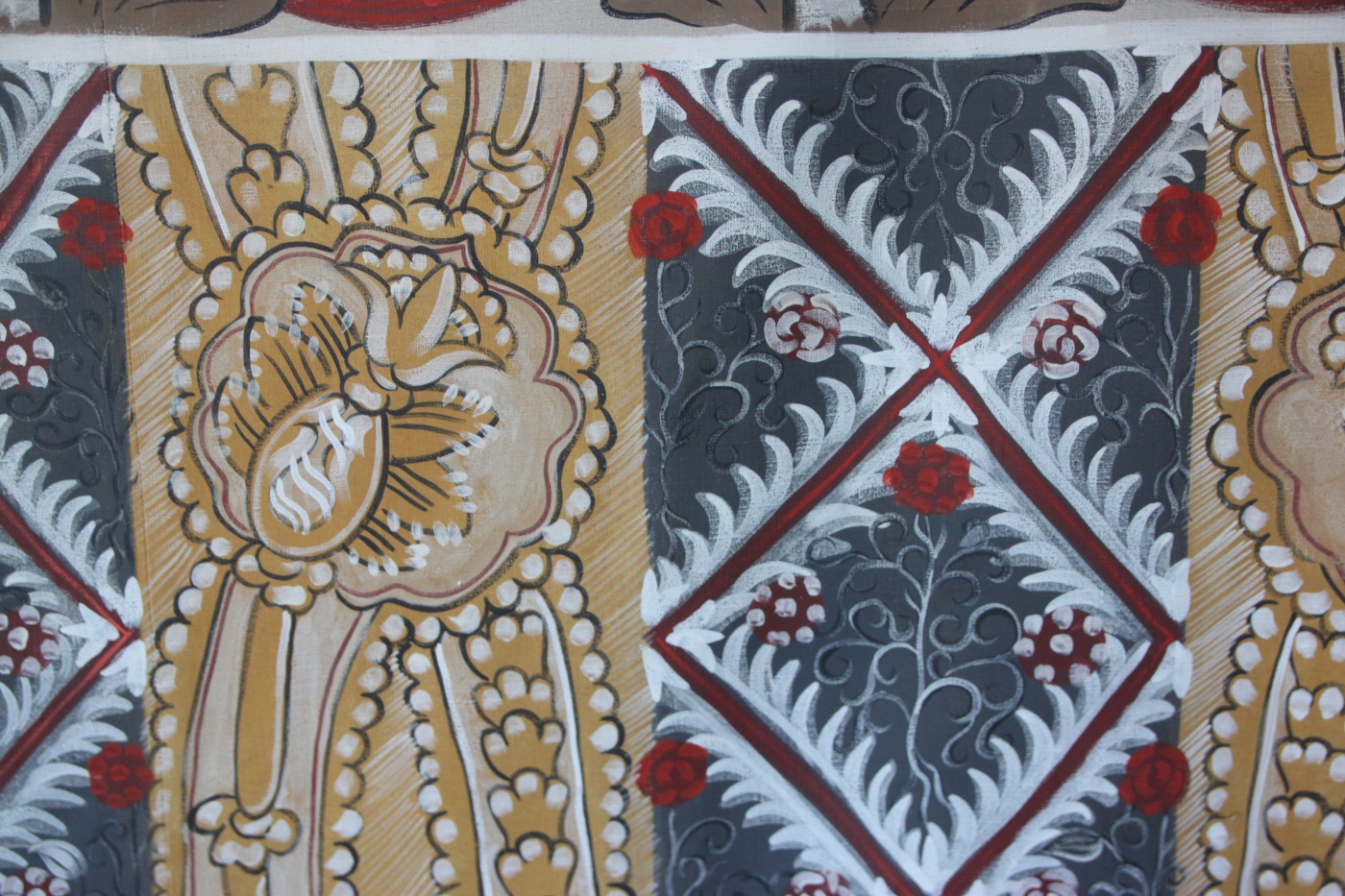 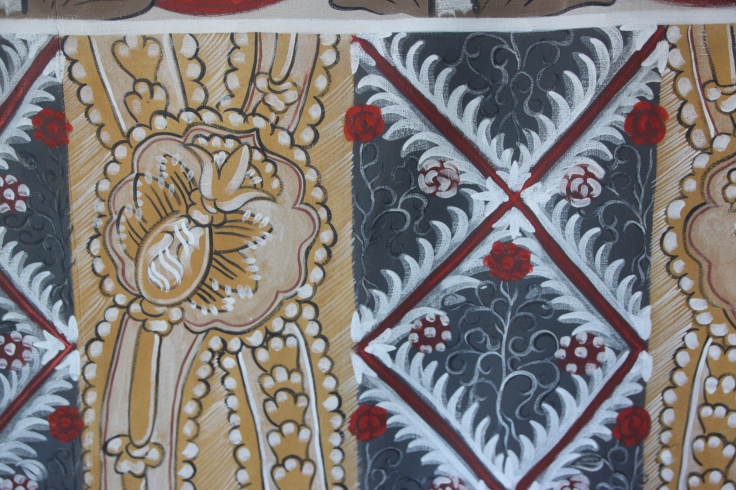 The majority of surviving medieval textiles from English churches are made of fine materials, silk velvet or silk damask, with delicately worked silk and gold embroidery.  When these items were commissioned they were costly and at the time of the Reformation in England, they still had a considerable material value and could be sold on for repurposing. Some vestments were even recycled and repurposed for use in the reformed liturgy of the Church of England and a large proportion of the surviving medieval copes remain simply because they were adapted to serve as communion table carpets.

It is clear, however, by looking at fifteenth and sixteenth-century inventories of English church goods, that alongside this rich embroidery there was a second class of textiles in common use in church. There are numerous references to textile items made of what is variously referred to as ‘stayned’ (stained) or ‘paynted’ (painted) linen cloth.

I’ve quickly gone through a couple of primary sources that are sat here on my bookshelves, to give you an indication of the breadth of items that were produced from stained or painted linen.   Firstly I spent about ten minutes flicking through the Edwardian Inventories of Buckinghamshire taken in 1552 & 1553 when the trappings of the Catholic religion were just about to be destroyed. I found the following references:

Amersham: ‘a linen clothe to the sepulture / a valens for the same of peynted clothe / a canaby clothe paynted a vayle peynted / a peynted clothe for the great roode’ p. 51.

From this quick flick through these sources, it is evident that stained or painted material was used for processional banners and pennants, as altar frontals and dossal curtains, as coverings for crosses on Lent, for hangings before images and hangings before the Easter Sepulchre in the chancel.

What this rather bald information found in these confiscation inventories does not give us, is an indication of the decoration on these stained painted cloths. For a sense of that, we have to look at earlier inventories from a time when the late medieval religious settlement was still relatively secure.  An inventory of 1529 from the well-equipped church at Long Melford in Suffolk, gives us the following details of stained or painted cloths:

‘over John Hill’s altar is a good stained cloath of the Trinity, of the gift of Robert Collett’.

‘at St Edmund’s altar is a painted cloath of St Michael and Our Lady.

‘Three long cloaths hanging before the rood loft, steined or painted with the Dawnce of Powlis’.

‘before St Anthony a stained cloath with part of the mownt’.

From the 1504 inventory of goods in another well-equipped church, St Mary the Great in Cambridge:

‘two curtyns of the same with angelles steyned upon them’

‘a peynted auter clothe with seint lawrence and seint stephen’

‘a nother auter clothe steyned with our lady piete’

A breadth of decoration on these stained or painted cloths is described, some purely decorative, but some clearly figurative. Some of these cloths were clearly for Lenten use, what we now term Lent Array, but it appears many were also for everyday use.  The cloths in both churches for the rood loft are interesting to note, stained at Long Melford with the ‘Dance of Paul’s’, i.e the Dance of Death and at Cambridge with a figure of Moses. 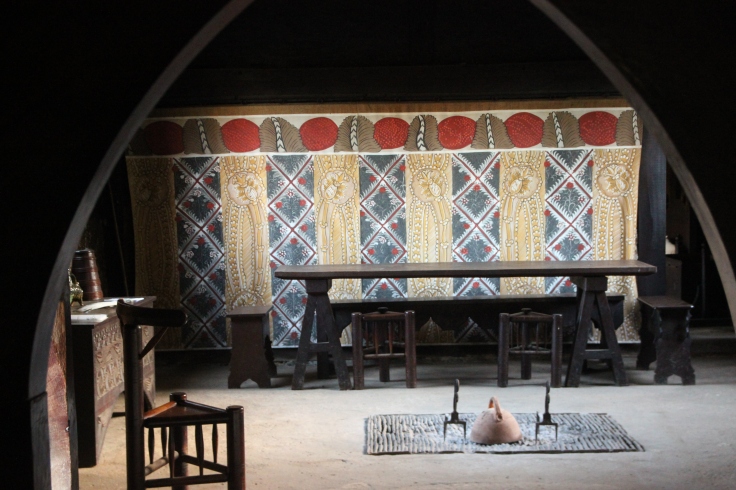 So how were these painted cloths manufactured?  The Weald and Downland Museum in Sussex have had a go at recreating a domestic painted cloth for the 15th-century Wealden Farmhouse House called ‘Bayleaf’ and that gives us some insight into the processes involved in producing such items for church use. The cloth at Bayleaf hangs behind the high table in the open hall of the house. The artist Melissa White has created a paled cloth that has been painted to replicate the patterns found on more expensive figured silks and velvets.  In the video linked below Melissa talks in some depth about the production methods used.

The production of these cloths is relatively straightforward. A course and inexpensive linen canvas is first sized with rabbit skin glue and stretched on a frame. The cloth is painted using Distemper, raw pigments mixed with the rabbit skin glue size, which is then painted on to the cloth with a variety of brushes, while still warm. In Melissa White’s reconstruction at Bayleaf, the pigments are relatively inexpensive ones: lampblack, chalk white, various earth colours including red and yellow ochre. The only costly pigment used is the brightly coloured Vermillion. The end result is vibrant, rich and attractive, but in comparison to embroidered textiles, the cloths would have been quick and cheap to produce even with elaborate figurative decoration.

Those who produced such painted textiles were known as ‘Stainers’ and were distinctive to the ‘Painters’ who only painted solid objects. The industry producing such cloths in London was sufficiently vibrant by the early 15th-century that the Stainers could organise themselves into a livery company. In 1502 they joined forces with the Painters to form a joint company the ‘Painter-Stainers’, which still continues.

Sadly Only a handful of examples of medieval stained and painted cloths from a church context survive in Europe and there is only one example from England. During the Reformation purge in England, these painted cloths were perhaps particularly vulnerable. Of little monetary value and already much used for domestic furnishing, they were given away to the poor (as at Swanbourne) or sold for a few pence to hang in dwellings. If not repurposed, they might be discarded altogether with little financial loss to the parish.

Two of the survivals from Europe are in institutions and for copyright reasons, I can only direct you to the images on the institutional websites.  The first item I wish to share with you is a banner from Gdansk in Poland and now in the Abegg Foundation in Switzerland.  The banner given by a group of Hanseatic merchants in the early 15th-century shows the Virgin Mary interceding for them to Christ the Man of Sorrows.  In this banner virtually the same colour palette is used as in the Bayleaf reconstruction: lampblack, chalk white, yellow ochre and vermillion.

The second is another processional banner from Hemmesjö old church, near Växjö in Sweden and is now in the Smålands museum.  Painted on a rough linen, at the top are figures of St Lawrence and St Olaf and at the bottom half, the banner is paled red and green.  Again the colour palette is primarily the same as the Bayleaf reconstruction, but with the addition of a vibrant verdigris green.

I can show you an image of the final object, the only English survival of this type of work from a church context.  It is a burse of the early fifteenth century and was found sometime before 1869 at the bottom of the parish chest at Hessett in Suffolk.  It’s now on display in the British Museum.  Once again of a coarse linen, the front has been painted with the face of Christ which we see appearing in a cusped opening.  It’s a Vernicle, the miraculous image of Christ’s face that appeared on the cloth offered to Jesus by Veronica on the way to the Cross.  An appropriate image in this context, given that the burse is designed to contain the linen cloths used at the Mass and on which the Host was consecrated.  In the four corners of the burse are images of the Four Evangelists and all this imagery is contained within a twisted ‘candy cane’ border.

On the reverse, in a similar opening, is seen an Agnus Dei, a symbol of the sacrifice of Christ.  The painting of the reverse of this burse is in much better condition than on the front, suggesting that it was less exposed to the sun.  Some sense of the original richness of the piece can be seen here.  The blue of the opening has been painted, not with blue pigment, but with layers of grey, a technique used also in wall paintings in this period.  There is clearly the use of red and yellow oxide, a hint of green and the ubiquitous Vermillion, the latter preserving its richness even on the faded front of the burse.  Two tassels survive, these have been dyed pink, which I know from my experience dyeing linen as a bookbinder can be achieved using Sappan or Brazilwood.  A beautiful piece and the sole surviving example of an artistic medium that was clearly ubiquitous in the medieval churches of England.