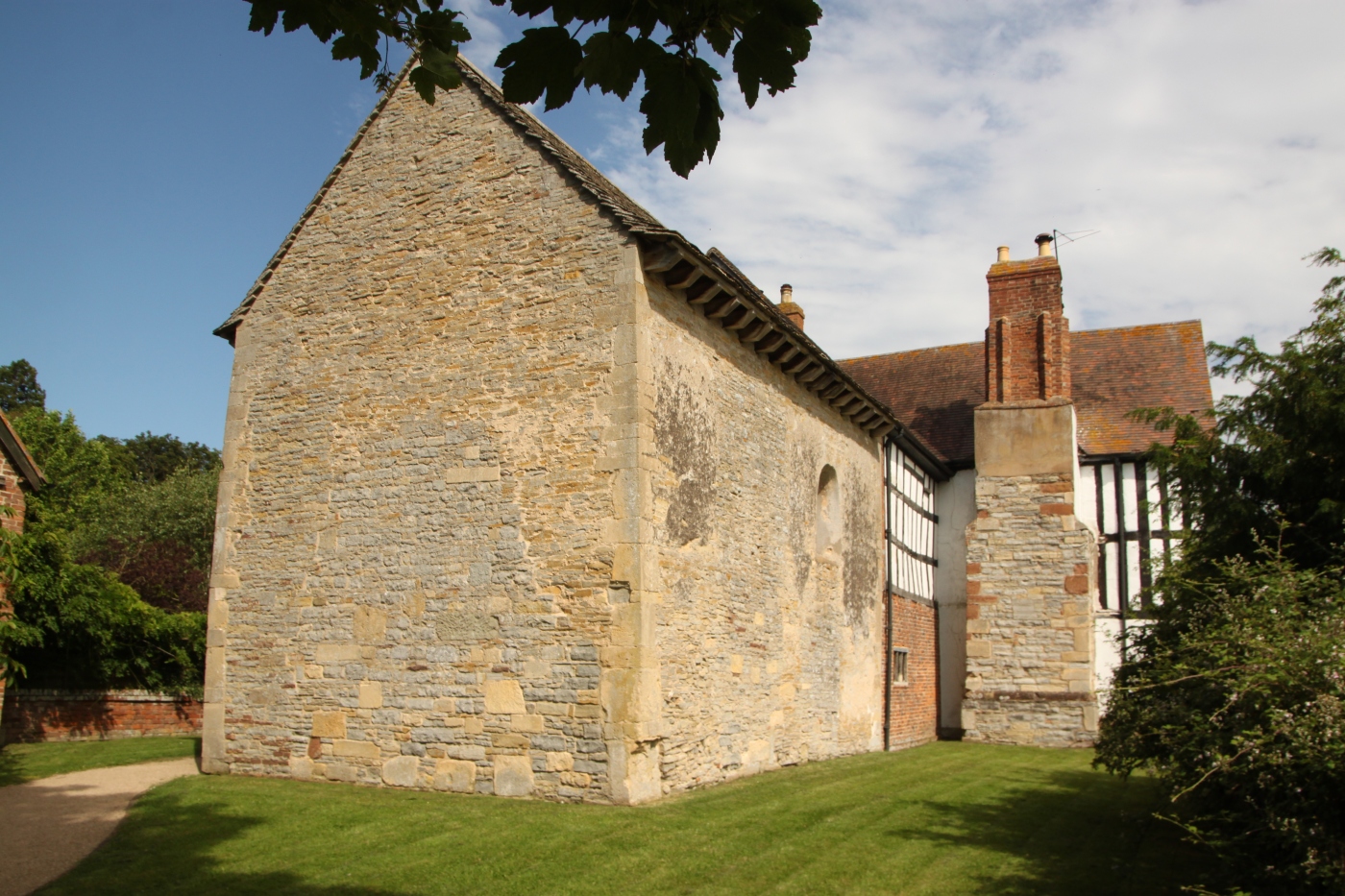 The village of Deerhurst on the banks of the river Severn in Gloucestershire is one of the most instructive places to study Anglo-Saxon church architecture. The fabric of the parish church, dedicated to the Mother of God, is in large part that of a Saxon ‘minster’ church built on an important royal vill in the kingdom of Hwicce, later absorbed into the kingdom of Mercia.

It is a very complex building to interpret and architectural historians get rather heated about the phasing of it, but the extant building is more or less a 9th century basilica church. As part of St Dunstan’s reforms of the English church, the original minster community was re-founded in 970 as a Benedictine priory. In 1059 Edward the Confessor, who had become patron of the priory and held secular lands here, did something rather drastic with that foundation that altered its fortunes. He divided the monastic property in half, giving the monastic church and some lands to the abbey of St Denis in Paris and using the rest of the lands to endow his pet project Westminster Abbey. Edward’s action left Deerhurst priory with a really meagre endowment, but somehow it managed to limp on until the Dissolution of the Monasteries, firstly as an impoverished alien priory and then from the 1460s after an audacious takeover bid, as the cell of Tewkesbury Abbey. The community’s poverty after 1059 is something of a blessing for us now, as it almost certainly accounts for the remarkable survival of so much of the Anglo-Saxon fabric, the monks were so poor that they couldn’t really afford to rebuild it.

If one important Saxon church is not enough, remarkably Deerhurst has two. For a short distance to the south of the minster church and on the edge of the monastic precinct, is the chapel of the Holy Trinity, commonly called Odda’s chapel. This building, which dates from the 1050s, just before the Norman Conquest, is the building I want to discuss in this article. Odda’s chapel is a rare survival in England of a private, non-parochial chapel and in common with the minster fabric, the building only survives due to economic considerations. At some time after its construction it appear to have fallen out of use as a church, but as a good, solid stone building it was too valuable to waste and was therefore repurposed for secular use and lost to view. It was discovered, virtually by chance in 1885, subdivided, immured and absorbed within a house called ‘Abbot’s Court’ the manorial centre of the estate given by Edward the Confessor to Westminster Abbey and let by them to tenants.

Before the rediscovery of its remains in the late 19th century, the chapel’s existence was known. The chronicle of Tewkesbury abbey, referred to a chapel ‘of the Holy Trinity’ opposite the gate to the monastic precinct, but it was assumed to be entirely lost. In 1675 Sir John Powell, who was the tenant of the Dean and Chapter of Westminster, discovered what is called the ‘Odda stone’, the dedication stone of the chapel, in the orchard of Abbot’s Court. The stone, which is now in the Ashmolean museum in Oxford, is an extraordinary document, which relates in detail the circumstances of the chapel’s foundation and its dates. The inscription carved in neat Roman lettering reads as follows:

It tells us that the chapel ‘a royal hall dedicated to the Holy Trinity’ was constructed by Earl Odda and that he built it ‘for the soul’ of his brother Aelfric. It further states that the chapel was consecrated by Bishop Ealdred of Worcester on the 12th of April in the 14th year of the reign of King Edward (the Confessor), i.e. 1053.

We know quite a lot about Earl Odda as he was significant figure in the reign of Edward the Confessor. According to the chronicler William of Malmesbury, Odda was a relative of the king and an important ally and that he benefited from the fall of Earl Godwin and his sons in 1051. In the aftermath of Godwin’s rebellion, Odda receives a lot of the lands confiscated from him and also his earldom. Odda’s own estates seem to have centred on Deerhurst and Pershore, where is also patron of their respective monastic communities. In the year Odda constructs the chapel at Deerhurst in memory of his brother, Godwin is rehabilitated and regains his lands. Although Odda is thought to have received other lands in compensation, he seemingly retires to Deerhurst and then takes monastic vows. He dies in 1056 and is buried at Pershore. With no heirs, his lands and patronage of Deerhurst priory pass to the king.

Despite the discovery of this extraordinary stone in 1675, Odda’s chapel was so concealed within the structure of Abbot’s Court, that the location of it remained a mystery and it took two more centuries before the structure became apparent. In 1885 as repairs were being made to the house, render was removed from the outside and that revealed a late Saxon window and as further render was removed, characteristic Saxon masonry began to appear. Thankfully, the interest of the local antiquarian vicar George Butterworth was sparked and out of what was a farmhouse kitchen and two chambers, Odda’s lost chapel emerged – a 45 foot long church consisting of a nave and chancel. Butterworth’s plan and drawings published in 1885 in the Journal of the British Archaeological Association are shown above. The chancel of the chapel was sadly mutilated having been subdivided into chambers and having an upper jettied storey added to it and the insertion of a 16th century chimney and fenestration. The construction of the chimney was done rather thriftily and old building material was reused within it and among that was preserved a vital piece of evidence – the arched head of a 13th century window, formed from the dedication stone of the chapel altar recording its dedication to the Holy Trinity. It was the last piece in the jigsaw puzzle that confirmed without question that this building was the chapel Odda constructed in 1053.

Although it is of rather modest proportions, Odda’s chapel is a high status building and it is beautifully, if simply constructed. Surprisingly for so late a date in the eleventh century, there is little in the way of influence from the continental Romanesque and the building is very much in the Anglo-Saxon idiom.

The building is constructed primarily of neatly courses rubble and was originally rendered, with only the stone dressings of the doors, the small and high set windows in the north and south walls and the characteristic ‘long-and-short’ quoins left exposed. Some of the original render remains on the south wall.

The interior has a stark minimalism that is of probably a far cry from its original appearance. Centuries of alternative use have resulted in the loss of any internal decoration and none of the original plaster remains. We must imagine that the heavy stone chancel arch (partly reconstructed) was surrounded with a painted decorative scheme in a palette of earth colours, somewhat like the schemes that survive in early post-conquest churches such as Kempley in Gloucestershire and Houghton-on-the Hill in Norfolk (illustrated below).

The chancel has been much altered by its domestic use and is still divided by a 16th century upper floor and it is impossible to get any sense of how this appeared when first constructed.

Here you will find a facsimile of the Odda stone and the original altar dedication stone. The latter, found in the chimney, has been recycled as the head of a 13th century lancet, suggesting that at some some stage in that period the chancel was remodelled with new windows and presumably a new altar.

The chapel is a rare survival of a type of medieval ecclesiastical building that would have been quite common in England, an extra-parochial place of worship. They survive so infrequently, as they cease to have a purpose following the Reformation. There are lots of unanswered questions about the foundation and subsequent function of Odda’s chapel. The dedication stone is clear that Odda constructed the building ‘for the soul’ of Aelfric, but what that means in terms of its liturgical and ritual function is difficult to say. Evidence for the use of the building in the later middle ages is scant. There is no evidence at all that Odda or any subsequent benefactor settled on the chapel an endowment to support a priest, or that the building fulfilled the function of a perpetual ‘chantry’ in the late medieval sense of the term. There is no trace of a chantry of the Holy Trinity at Deerhurst at all in the records the dissolution of the chantries in the reign of Edward VI. Perhaps Odda intended to endow it, but with his loss of lands after 1053 and the taking on of monastic vows, he was unable to do so? Or it may have simply functioned as an unendowed proprietary chapel on his estate. We have one possible mention of it outside the Tewkesbury chronicle in the 13th century. We know that the property was part of the estate given to Westminster Abbey by the Confessor and that in 1287 William of Derneford, who was the lessee is recorded as having a chapel on his lands. When the chapel ceased to function as a place of worship, or when it was absorbed into Abbot’s Court will remain a mystery.

Butterworth, G.1886-7. “The Saxon chapel at Deerhurst”, Transactions of the Bristol and Gloucestershire Archaeological Society , 11: 105-16.

One thought on “Earl Odda’s Chapel at Deerhurst”