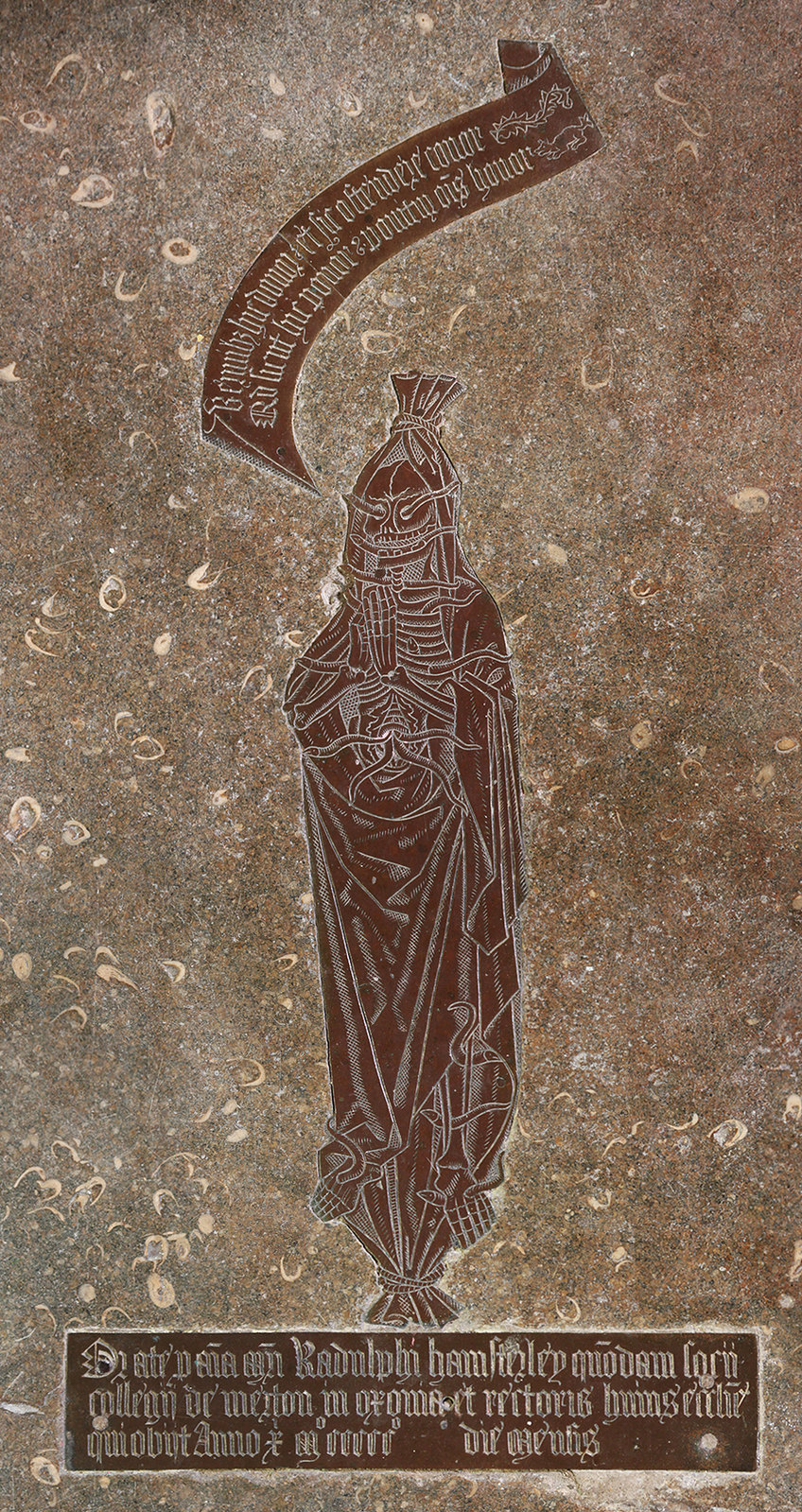 In the centre of the chancel at Oddington in Otmoor, in eastern Oxfordshire, is a large purbeck marble slab into which is set one of the most unusual monumental brasses from late medieval England.  The brass consists of an effigy, a corpse in a tied shroud, with it’s hands in the attitude of prayer.  The corpse is skeletal and well through the process of putrefaction and issuing out of the body cavity, from between the ribs, leg bones and from the sockets of the eyes, are wriggling maggots or worms.  Such memento mori were not unusual in late medieval England, both shroud brasses and transi tombs were common from the middle of the fifteenth century and survive in some quantity, but this example is particularly grisly and intense. 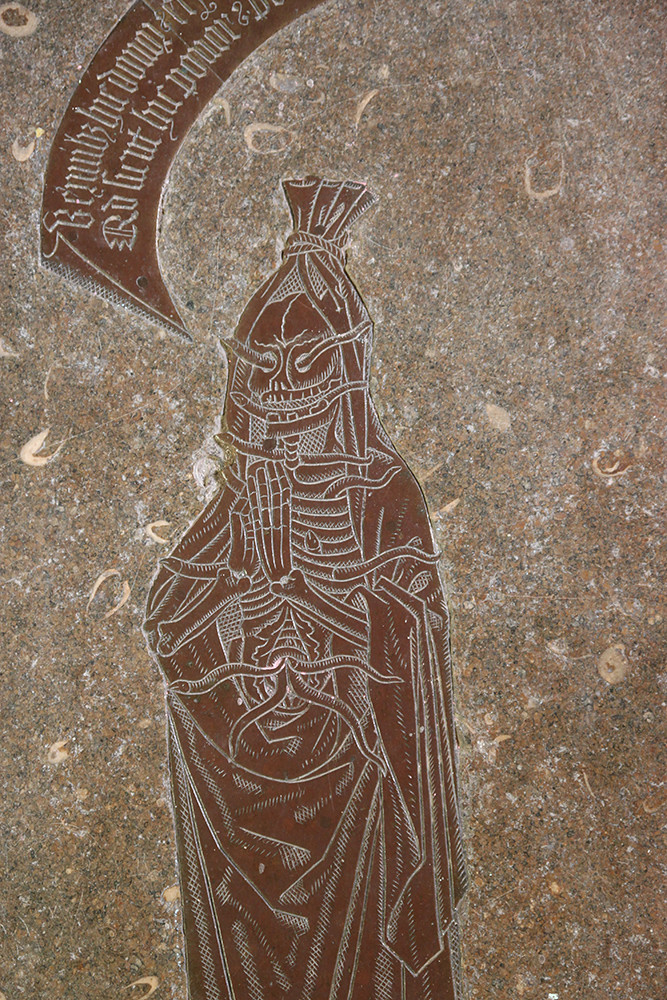 Below the effigy is an inscription that identifies the persons commemorated, it asks for prayers for Master Ralph Hamsterley, a fellow of Merton College Oxford and Rector of Oddington.  Issuing from the mouth of the Hamsterley’s cadaverous effigy, is a scroll, a Tudor speech bubble, with the following Latin rhyme:

This can be translated as:

Here I am, given to the worms, and thus I try to show
That as I am laid aside here so is all honour laid aside.

Here laid before us is in brass is Hamsterley ‘given to the worms’.  The brass must have been erected within Hamsterley’s lifetime.  He died in 1518, but he actually ceased to be Rector of Oddington in 1508 and it is likely that the brass was erected before that time.  As we will see, Hamsterley wasn’t actually buried here.  Space has been left for the inclusion of Hamsterley’s date of death in the inscription, but this still remains blank, because he was buried elsewhere and ceased to have a connection with the place, nobody bothered to come and add his date of death.

So here ten years before his death, Hamsterley was clearly contemplating his own mortality and if this brass is anything to go by, seemingly thinking on the sheer futility of human vanity and honour.  If you think that indicates that Hamsterley was a humble man, think again, people are always much more complex than that, aren’t they?  In life Master Ralph Hamsterley was a man of great ambition.  Although he held a number of parochial livings, he was primarily career scholar in Oxford.  At the time the Oddington monument was being laid down, with all it’s self-deprecating imagery, Hamsterley was in the process of contemplating the latest move in his progression up the Tudor academic career ladder. 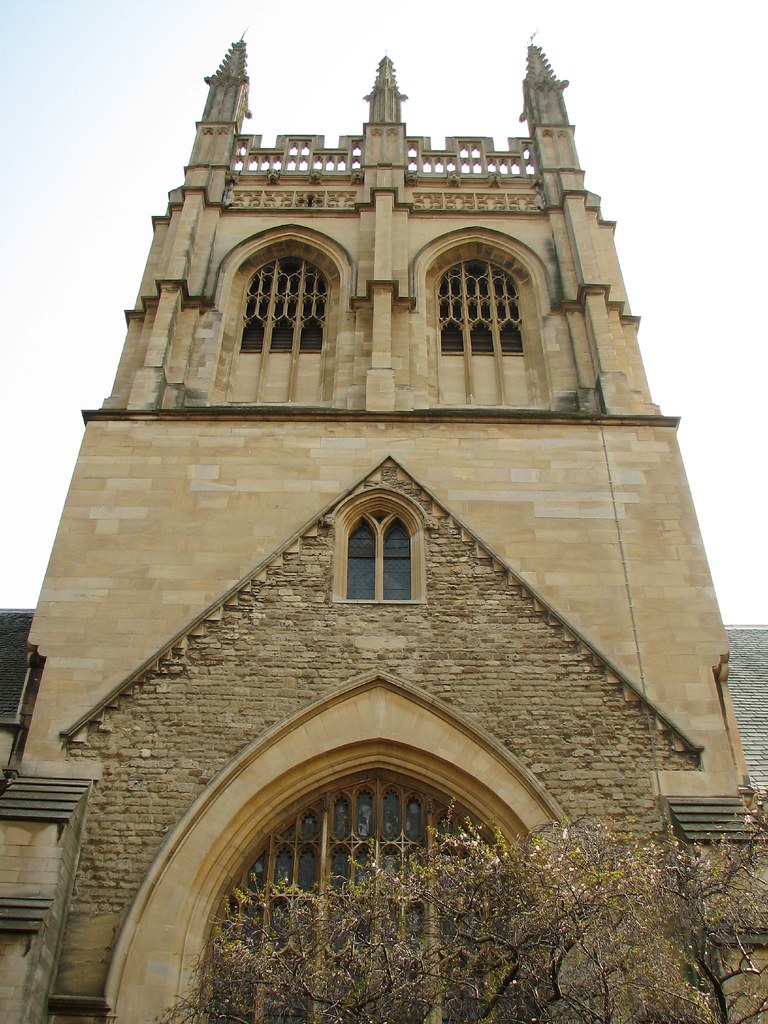 Born in the 1450s, he was a native of Durham, but by the late 1470s was a fellow of Merton college Oxford. He was a proctor on 1481 and served as principal of St Alban’s hall,  next door to Merton and since incorporated into it.   He spent the next twenty years in Oxford as a fellow at Merton and in both 1507 and 1508, he came very close to being elected Warden of Merton, but was defeated and the post went to others.  Not to be downhearted, he then started looking elsewhere in Oxford for a similar position.  In May of 1509 he decided to give a gift, of some sort, to University College.  Although we don’t know precisely what the gift was, it was generous enough for the Master and fellows of University College to consider Hamsterley as a benefactor of the college and add his name to the obit roll of the college, so that his gift would be remembered for perpetuity.  This gift, presumably financial, seems to have been part of calculated campaign to secure the Mastership at University College.  It worked, very soon the Master of the college died and in September 1509, Hamsterley was duly elected as Master.  His election was not without controversy, the college statutes stated that only fellows of the college could be elected Master and as fellow of another college, he was an outsider, and some of the fellowship resented his presence.  His election was contested and he had to seek recourse to Archbishop Warham to be confirmed in the role and thereon in had trouble controlling the fellows.  Nevertheless the ambitious Hamsterley remained as Master of University College, until his death in 1518.

After laying the brass at Oddington, Hamsterley began what can only be described as a campaign of a memorialisation across Oxford.  The brass at Oddington was to be the first of a series of four brasses that Hamsterley would lay down in his own memory in his lifetime. The other brasses at Durham, University and Merton colleges are all now lost, but Anthony Wood the Oxford antiquarian, saw the University and Merton brasses in the 1650s and transcribed their inscriptions.

At University College, Hamsterley had a brass laid down right smack the middle of the college chapel.  Wood tells us that ‘on a small marble stone, was the effigies of a man in a gown’, below was an inscription invoking prayers for Hamsterley’s soul and stating that he was fellow of Merton and Master of University college.  He wasn’t going to have his great benefaction of May 1509 forgotten and unusually the inscription on the brass records the obit, stating that his obit should be kept on the second feria after the feast of the Holy Trinity – forever!

The brass he laid at Merton college, his alma mater, was also rather unusual.  It was in the south transept of Merton and was not just a memorial to Hamsterley but also commemorated a friend, colleague and rival.  Wood tells that that on the same stone, there were two brass effigies of men side by side and below them a double inscription.  The first portion of the inscription invoked prayers for the repose of the soul of Thomas Harper, who was Warden of Merton between 1507-1508, the man Hamsterley had lost out to in the 1507 election.  The second portion of the inscription asks for prayers for Hamsterley himself, who is referred to here as Master of University college, as well as a fellow of Merton, indicating that the brass was erected after September 1509, well over a year after Harper’s death.  Were Harper and Hamsterley friends, or was erecting this double monument to a former Warden and rival, an attempt by Hamsterley to ingratiate himself with the Merton fellowship and further his career?  Although Harper was buried in his living in Bristol and not here, when Hamsterley died he appears to have been buried underneath this brass at Merton.  He was determined he would not be forgotten in his old college and he endowed a chantry priest ‘Hamsterley’s chaplain’, to sing masses for his soul at the altar of St Catherine in the chapel at Merton.  It was probably before that altar that the brass was placed.

These three brasses laid down by one man, reveal an awful lot about his personality, his piety and his ambition.  Ralph Hamsterley was a man of clear contradictions, well aware of his own mortality and prepared to invest in his memorialisation well before his own demise; he was clearly a man of significant ability too, an ambitious man who was determined to make his mark and to be remembered in Oxford.

Sources
Details of the brasses in Merton and University Colleges are found in: J. Gutch (ed.), The History and Antiquities of the Colleges and Halls in the University of Oxford: by Anthony Wood (Oxford, 1886), pp. 26-27 & 62.