The following article is a follow on from my previous articles on the hanging pyx and sacramental reservation in late medieval Europe.  You will find the first of these articles, which introduces the concept here.  There are a number of secondary articles on the Blog about the mechanism of the hanging pyx, on a silver medieval pyx, and a medieval pyx case or container.
Medieval images of the hanging pyx from an English context are extremely rare indeed.  The one I know, showing the high altar at Westminster Abbey, I have shared on my earlier post on the subject.   Images of the hanging pyx from illuminated manuscripts produced on the near continent, in France and the Low Countries, are very common and here is a series taken from fifteenth and early sixteenth century manuscripts. Some are manuscripts in the Morgan Library in New York, some from the Royal Library in the Hague. The prevalence in illuminated manuscripts of images of altars with hanging pyxes suspended above them and the total absence of images of tabernacles on altars, is fairly clear evidence that this arrangement for the reservation of the Blessed Sacrament was normative in Northern Europe.  It is interesting to note that in the majority of such illuminations I have seen, the tent-like canopy that is suspended over the pyx in its case, is made of green cloth.   I wonder does this represent contemporary useage, or is it just an artistic conceit?

Morgan MS G.1, f. 149r is illustration from Book of Hours, illuminated in the Loire Valley Use of Paris and dates from the mid 1470s.  This illumination is at the beginning of the text of the ‘Placebo’ the office of Vespers for the dead.  We see the office being sung in the presence of the deceased, who is in a coffin under the pall in the centre of the quire. Beyond a quire screen we see an altar raised on a wooden footpace, hung with blue hangings, frontal and riddel curtains.  Above the  altar the golden pyx case can be clearly seen hanging underneath a green cloth pyx canopy.

Morgan MS M. 8, f. 189r., this a page from a Southern French Breviary dating from c. 1510. A book used by a secular cleric, it shows the singing of a choir office.  The Gothic quire stalls are full of the sort of secular ecclesiastics who would have used the book, all dressed in surplices. Two rulers of the choir sing from a central lectern and there are lecterns in front of the stalls containing large antiphonals.   The altar is surrounded by riddel posts topped with angels with purple curtains.  The golden pyx, or its case, appears in the middle of its canopy, which is purple to match the altar hangings.

Morgan MS M. 104, 112r, is a page from Book of Hours produced in the 1450s or 60s in Mons in Belgium.  Again this is the opening of the ‘Placebo’ Vespers of the Office of the Dead. We see a Priest in a red cope assisted by a server, reading the Office over the palled coffin.  There are three mourners in black sat in the quire stalls.   Here the altar is less distinct, with a red frontal and a gold reredos.  The pyx. all you see of the pyx is the green cloth canopy, there is no sign of the pyx or its case.

Morgan MS M. 157, 129v is a page from Book of Hours illuminated in northern France, perhaps in Britanny.   Again we have part of the Placebo, Vespers for the Dead.  The text ‘Dilexi quoniam exaudiat’, is the opening of psalm 114.  Although this accompanies the text of the office, this interesting and detailed illustration is of a Requiem mass.  The mass is taking place in a vaulted church and the coffin is covered in a pall and surrounded by a wooden hearse.  The priest in a murrey coloured chasuble elevates the host, while the rulers of the choir sing the propers from a Gradual on a lectern.   The altar has riddel posts topped with candles standing round it and dark blue curtains. The pyx is shown in considerable detail.  It is suspended by a cord from the vault and is a gold vessel under a green cloth canopy with a red lining.  On the top of the cloth canopy is a golden ball, which may be a pulley or counterweight device. The suspended pyx rather than being simply a case, is a vessel with a bowl and a foot.

Morgan MS M. 293, f. 120r is a page from a Book of Hours illuminated in Besancon in around 1430.  This image like the last, is of a funeral mass and accompanies the opening of the Placebo.  The deceased is in a palled coffin in the centre of the church, surrounded by a fabulous wooden framed hearse covered in candles.  A priest stands at the altar in a blue chasuble with his hands in the orans position, he is praying. The altar has a golden altarpiece with an image of the Crucifixion on it, two lit candles and a chalice.   Here only the pyx canopy is shown, a gold canopy with a multi-coloured fringe.  No pyx itself is shown, but the suspension is shown, the canopy is suspended from the centre of the chancel vault and once again there is a golden ball, a counterweight mechanism or pulley.

Morgan MS M. 632, f, 100v. is from a Book of Hours, illuminated in Paris around 1520.  This curious monochrome in its Renaissance fame is really instructive.  Again what we have in this scene is the the Office of the Dead, which is being conducted around an elaborate hearse.  The altar at the east end of this glazed church is hung with black and it appears to be set under a Baldachino, for four classical pillars are shown that would have supported its top, which is out of sight. The pyx arrangement is show here, a cloth canopy from which hangs the pyx case.  The pyx case is either made of openwork or is glazed and inside you can see a standing pyx with foot. 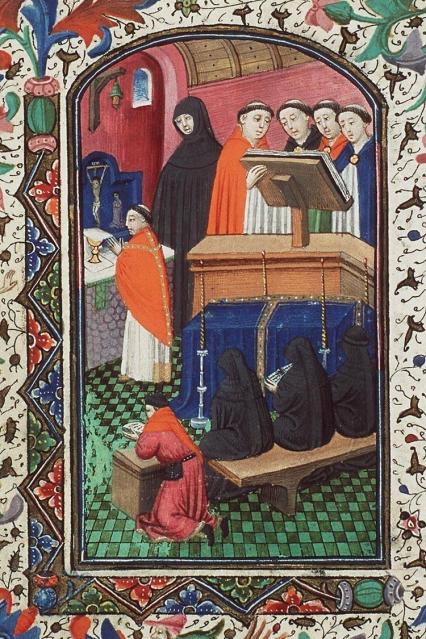 The Hague, RMMW, 10 E 2, f. 14v6, Our last image is a page from a Book of Hours produced in Flanders c,1450.  The scene is another funeral mass and the blue palled coffin is in the centre of the choir, surrounded by clerks singing the propers and black-robed mourners sitting in a row on a wooden bench.  A man in secular dress kneels at a prie-dieu praying.  The priest, dressed in a red chasuble, is at the altar celebrating the mass, the altar has a blue reredos with an image of the Crucifixion,  There is a Corporal, chalice and pall on the altar.  Above the altar is the hanging pyx, it is hanging from a wooden gallows-bracket fixed to the wall.  The gold pyx case can be seen under a small green cloth canopy.